So, you’ve decided to bring your story to life? An important aspect you will have to get right is the shot list. Curating a shot list isn’t the most straightforward task. But the shot list is essential to scale creativity, minimize downtime and increase filming productivity.

We delve into how to prepare the shot list to compliment your script and storyboard. Read our in-depth guide before hitting the camera angles.

A shot list is a detailed sheet that lists every camera shot the crew will take during a scene in the video production. Essentially the shot list serves as a roadmap for the cinematographer and the camera crew in the shooting process.

A cinematographer or the director can prepare the shot list. The shot list ensures you work within your time constraints while maximizing productivity. Think of a shot list as a checksheet you will need for every production day.

A shot list template is a pre-designed shot list containing the essential requirements of a shot list. The template enables you to create a custom shot list hassle-free. Every scene is unique, and so are the templates. A custom design and personalization can go a long way in envisioning your film. 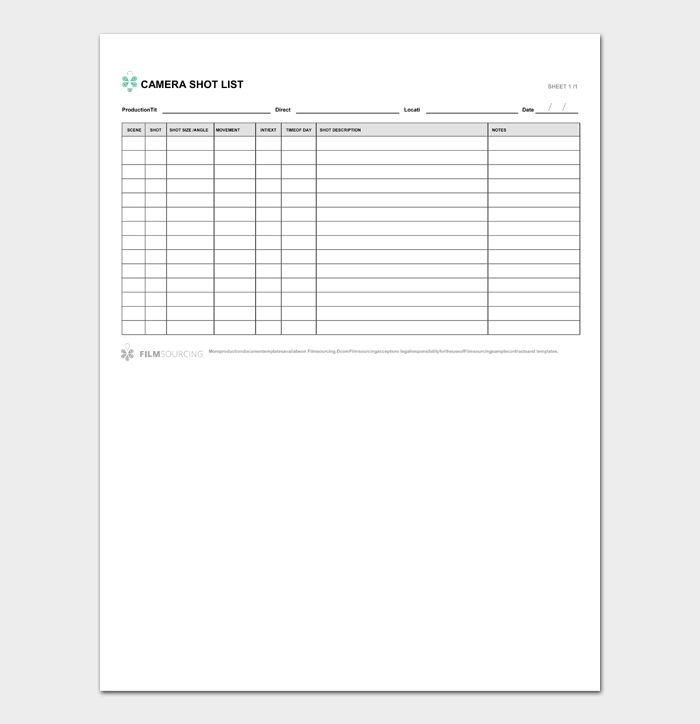 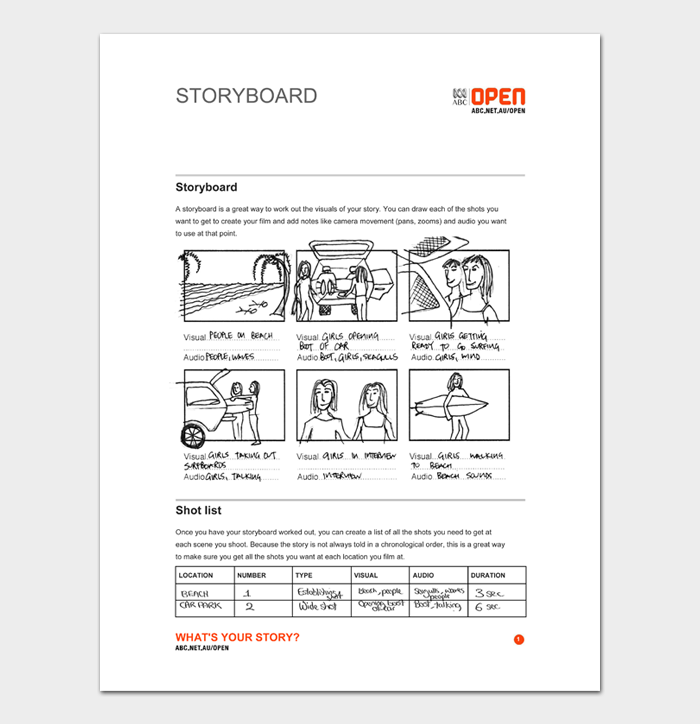 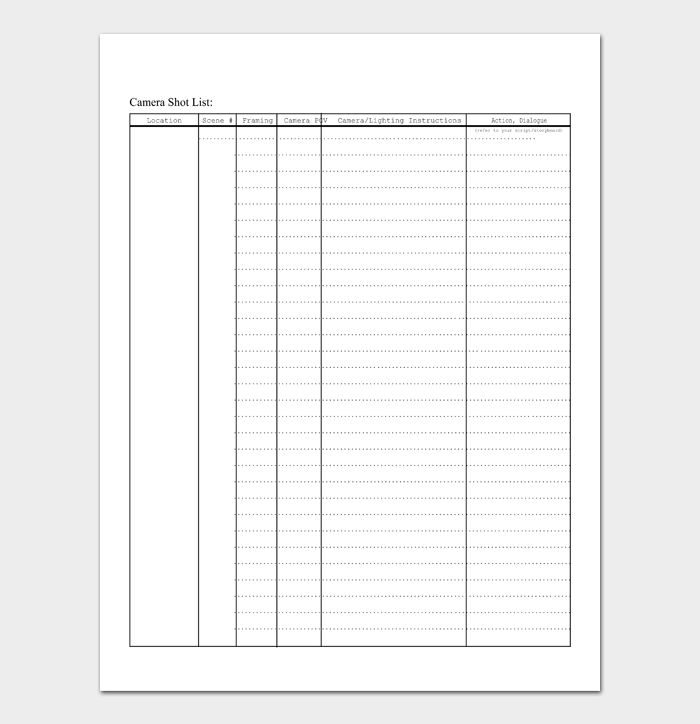 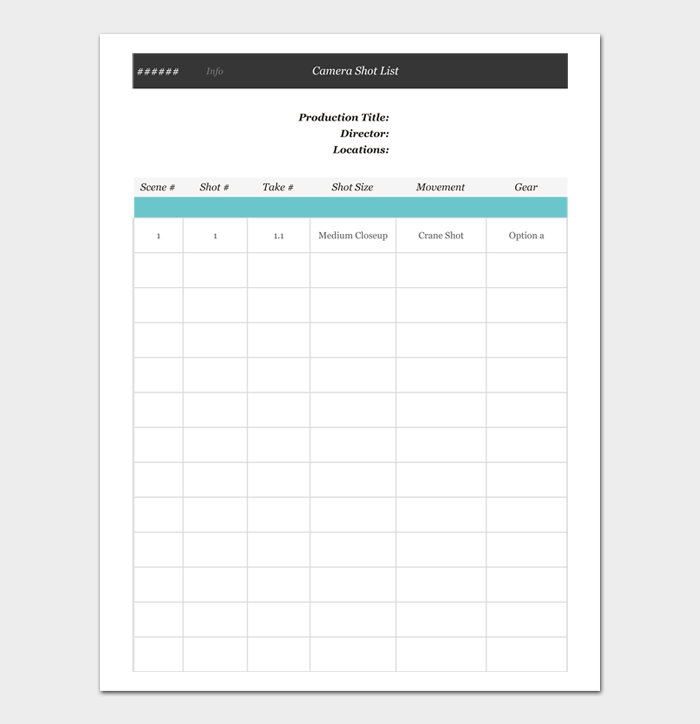 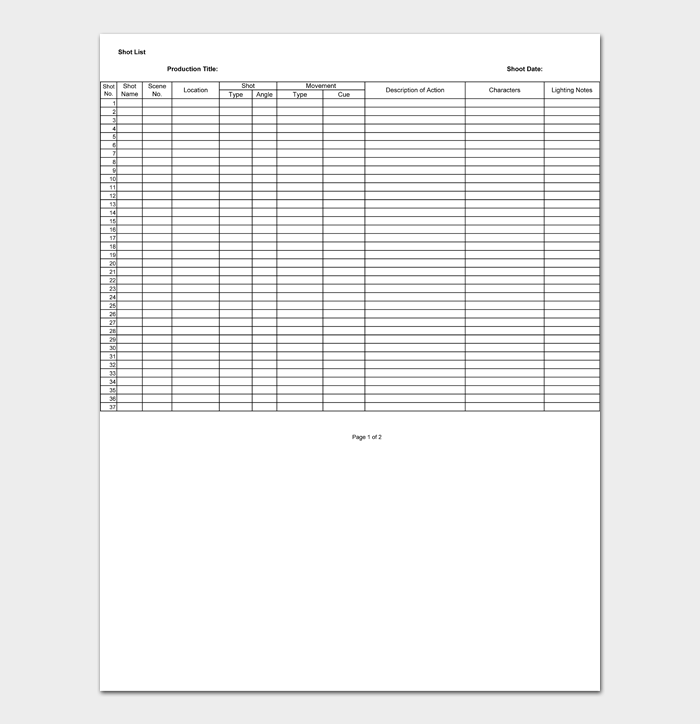 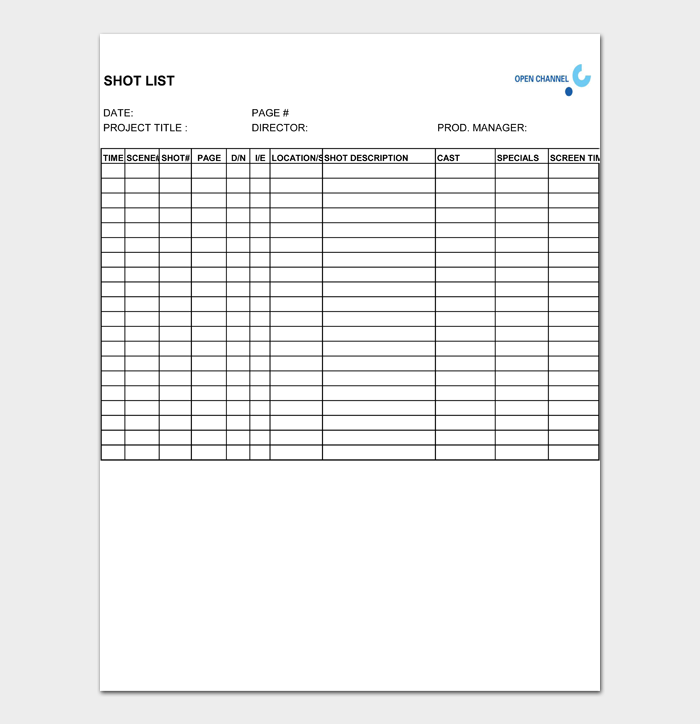 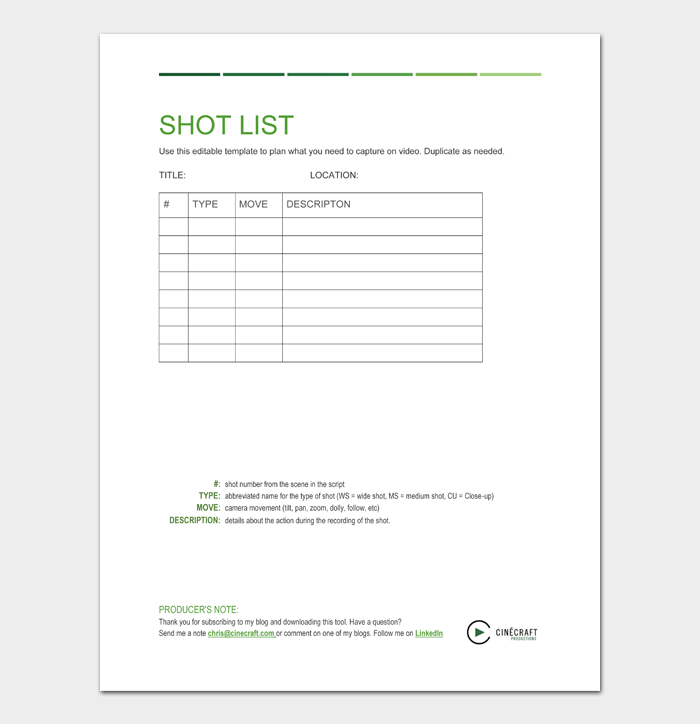 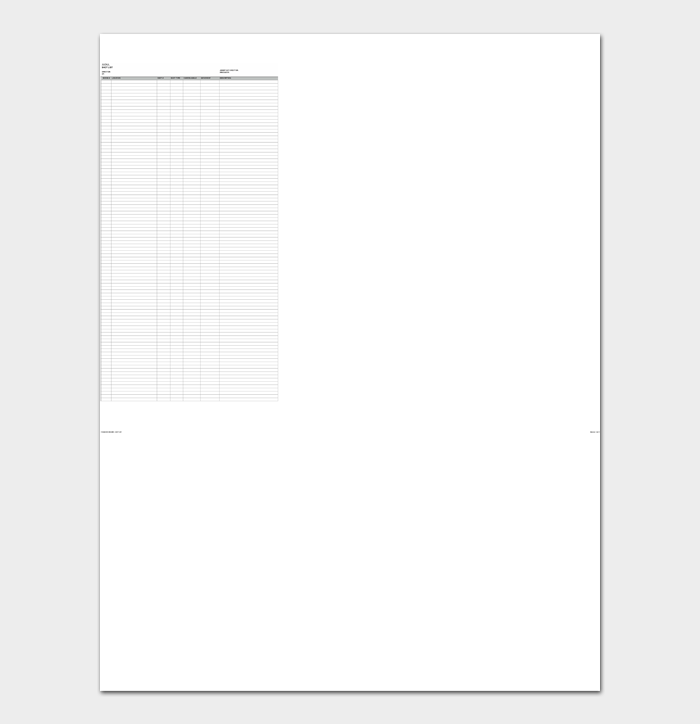 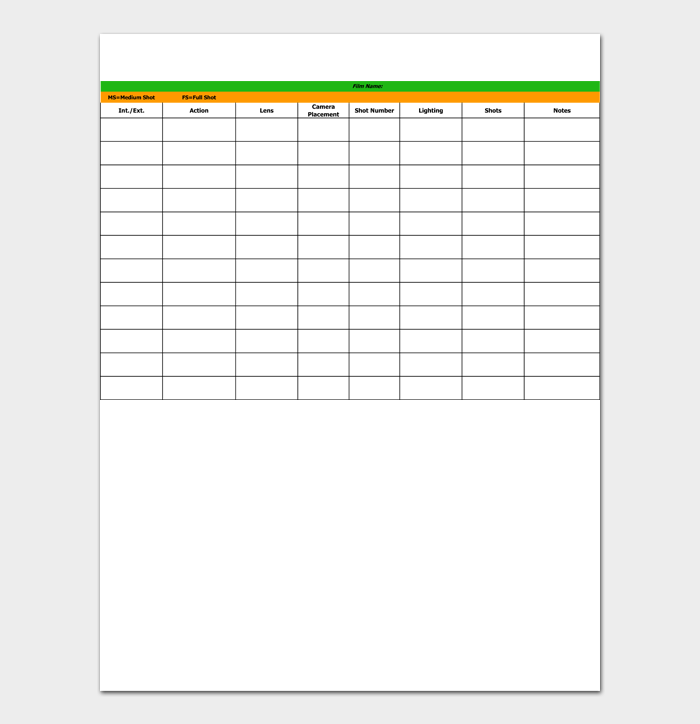 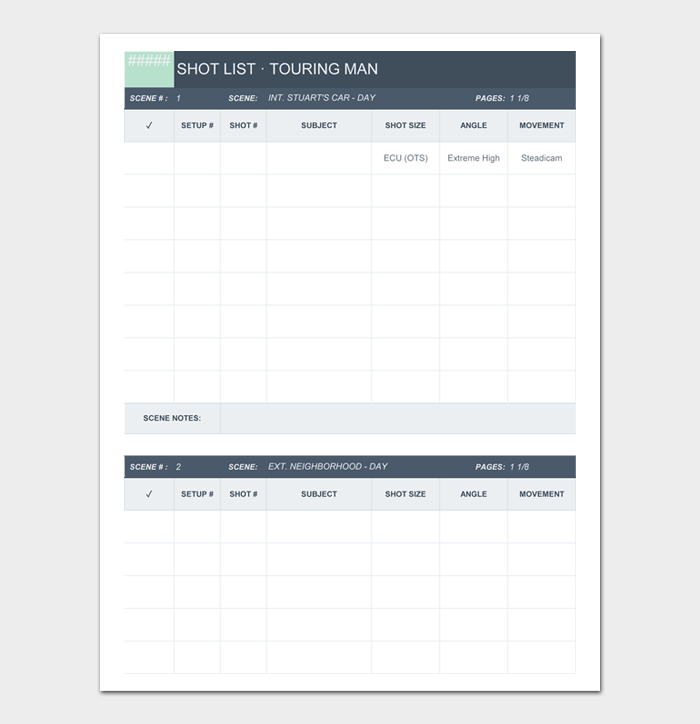 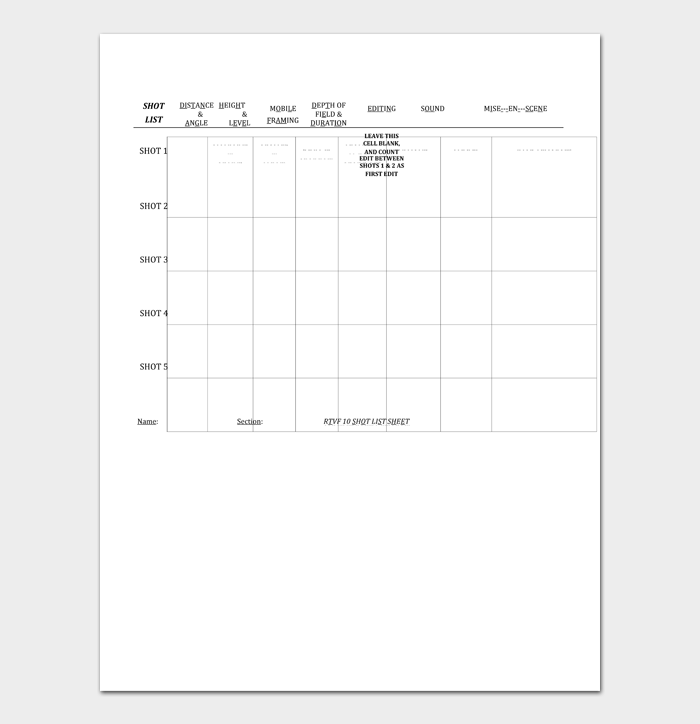 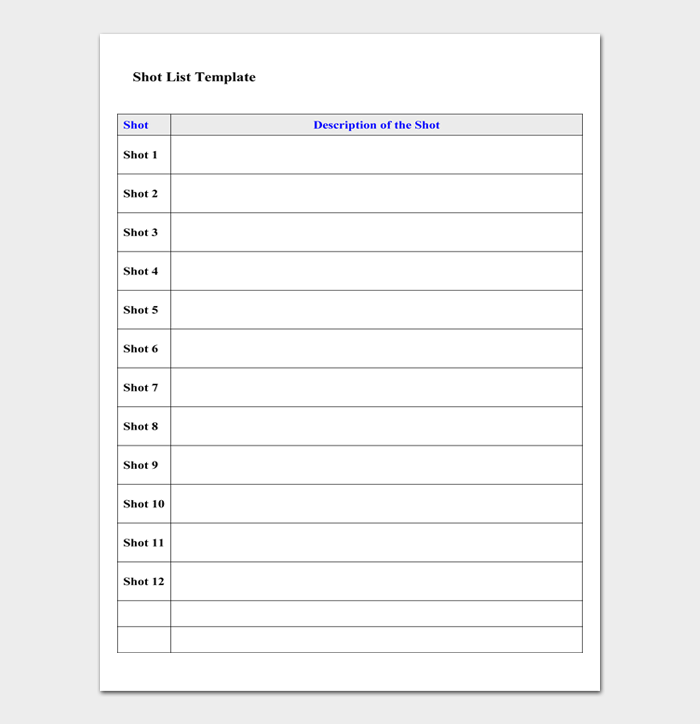 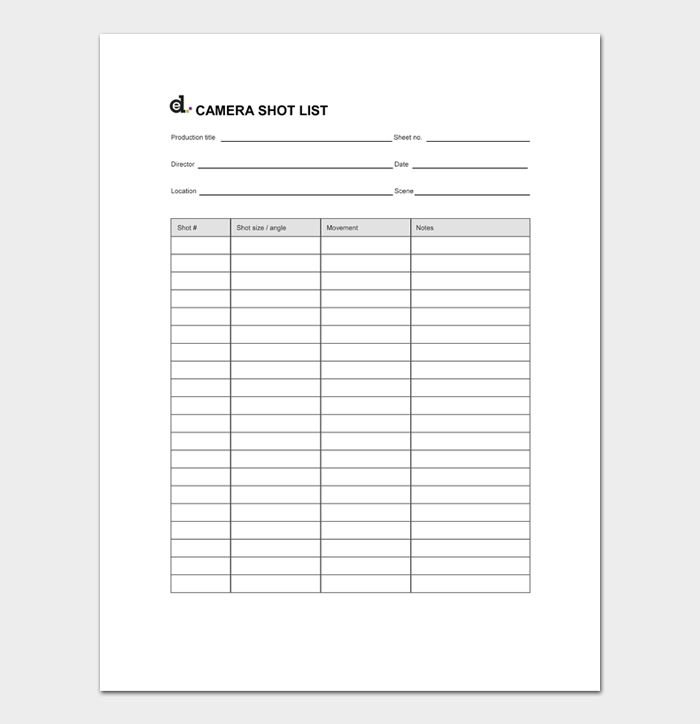 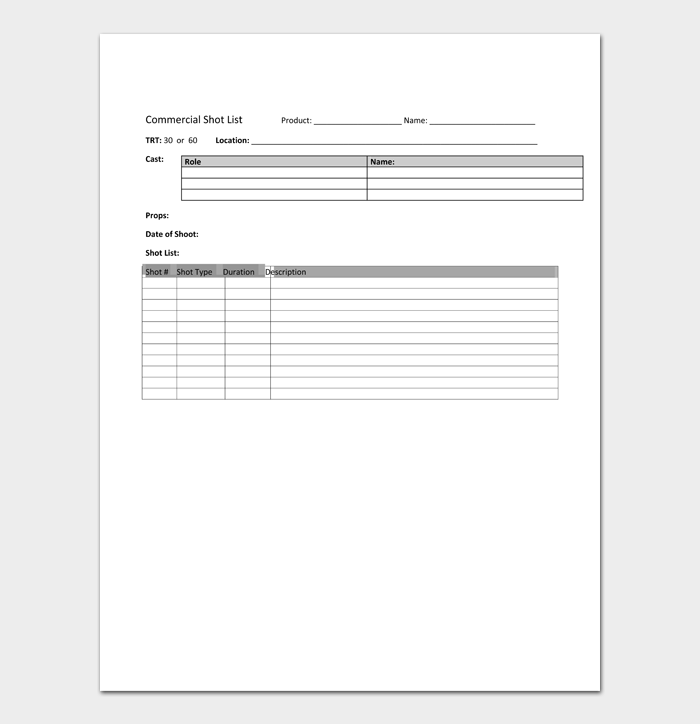 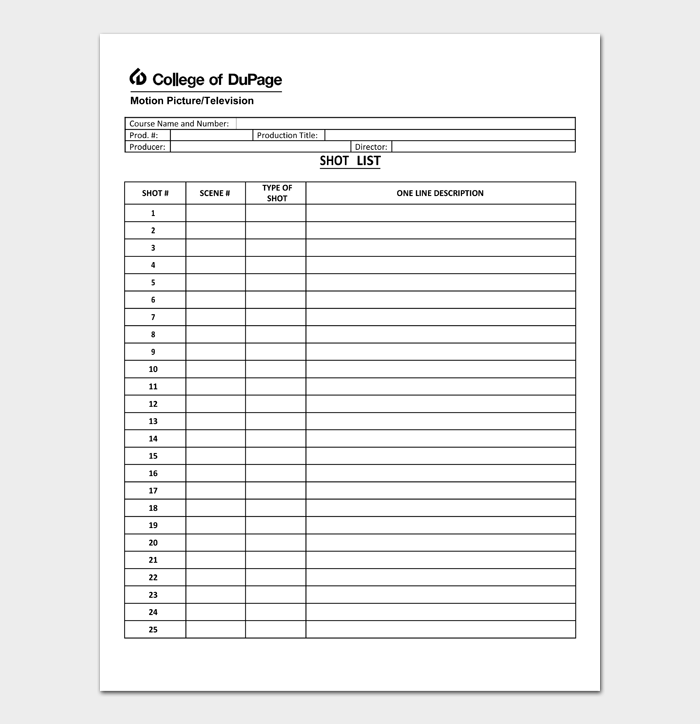 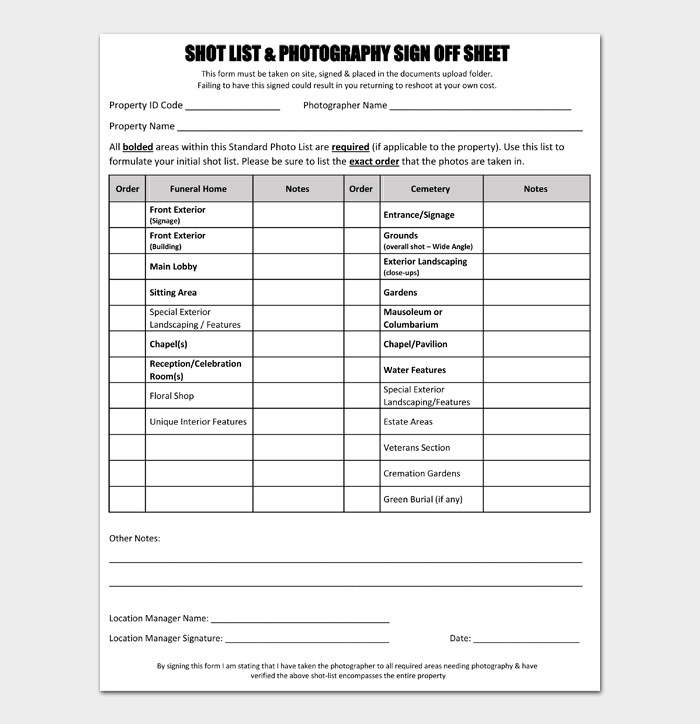 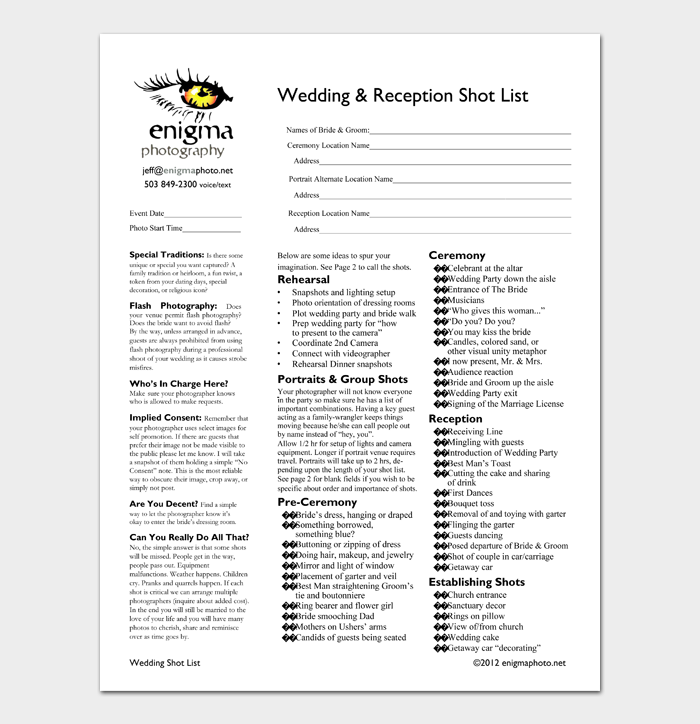 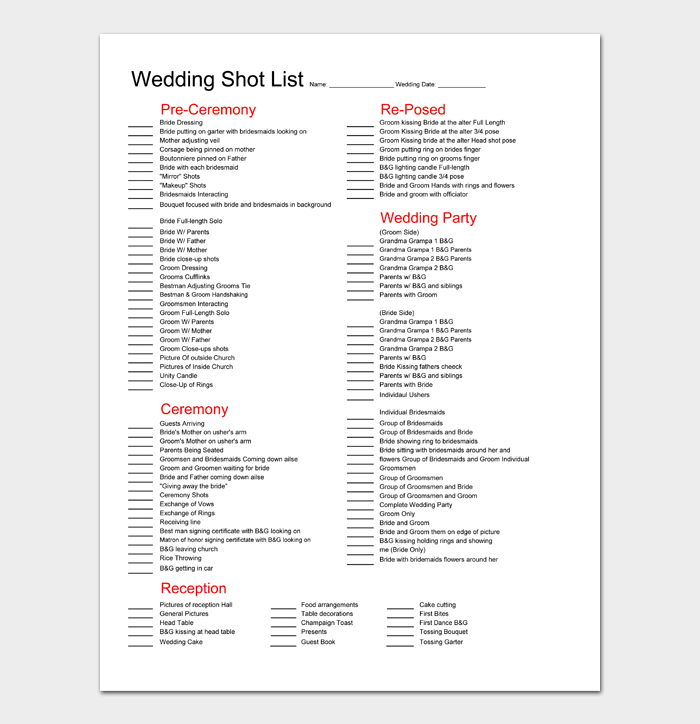 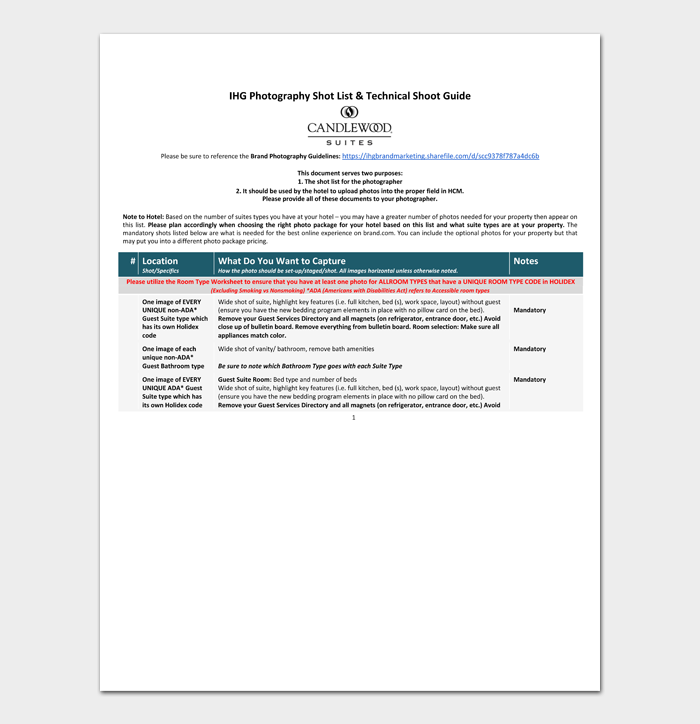 We understand your scene may be unique. It would make sense to seek a template that’s close to your shooting needs. However, some core elements in any shot list template cut across different film needs. Here are some:

Scene details can be as detailed as you want. Scene details break up the film shoots into smaller and comprehensible scenes. Include the scene number and the location of the scene. Location can be interior or exterior.

Setup Details are the description of camera placement and lighting. The details can include over-the-shoulder angle or any custom setup for the scene.

The shot number is the reference number for a shot in a row. If the setup changes, reset to 1.

The size of the subject in the frame.

Identify the camera type for every shot, the camera lens, and frame rates.

Camera angles incorporate the different types of angles relative to the position of your subject. Describe if there will be changes in the camera angle for an individual shot.

Camera movement is the change in direction during shooting.

Note: Camera movement impacts the shot quality either negatively or positively. It is best to keep the movements to a minimum.

Include the sound details, if there’s any dialogue, and how to capture the sound.

The estimated time to shoot is essential for any shot list.

The essential elements of the shot list template serve as a pointer to what you should include. You can include details to suit your unique filming needs.

A shot list does more than direct and coordinate filming. It provides a chance for the director and cinematographer to review how camera angles tell the story and if they can be more creative with them.

Here’s a five-step guide on how to make a shot list:

A shot list collates the director’s and the cinematographer’s vision of the film. You must get it right the first time since the sheet directs your filming session. Here are some tips to help prepare an efficacious shot list:

Instead of blanket descriptions, use lengthier descriptions for each shot. Be careful not to clutter the list. When working with professional actors, you will not need a lot of descriptions.

Developing a shot list and storyboard concurrently helps you draw the perfect illustration for each scene. Some details such as camera angle, camera movement, and lines from the script will appear in both the shot list and the storyboard. You may tweak them a little, but they minimize the time you would take writing two separate lists at different times.

Shooting can have complicated and more uncomplicated scenes. You would want to start with the complicated shots. This keeps your actors and crew motivated as things get easier.

The simplicity of the shot is a broad metric to consider. To get the perfect organized filming experience, you need to consider the location, availability of the actors, props, weather, and time.

Once you have everything in place, you can create your list and notify the crew of each scene’s shooting days. If you meet the day’s quota for shooting, you may shoot film inserts that take a few seconds.

Create a shooting script, not a chronological script

Renowned directors will tell you shooting doesn’t follow the script from start to finish. You may even shoot the last scene in the nascent stages of your film. Create a shooting script you’ll use to create the shot list.

Consider the availability of actors, location, and crew before creating an organized shot list.

A shot list propels your film’s vision to the near-perfect film. When preparing the sheet, there are multiple factors to consider, such as time, the complexity of the scene, availability of actors, and more. Ultimately it boils down to your creativity and innate organization skills. Use our guide as a reference when creating the shot list. 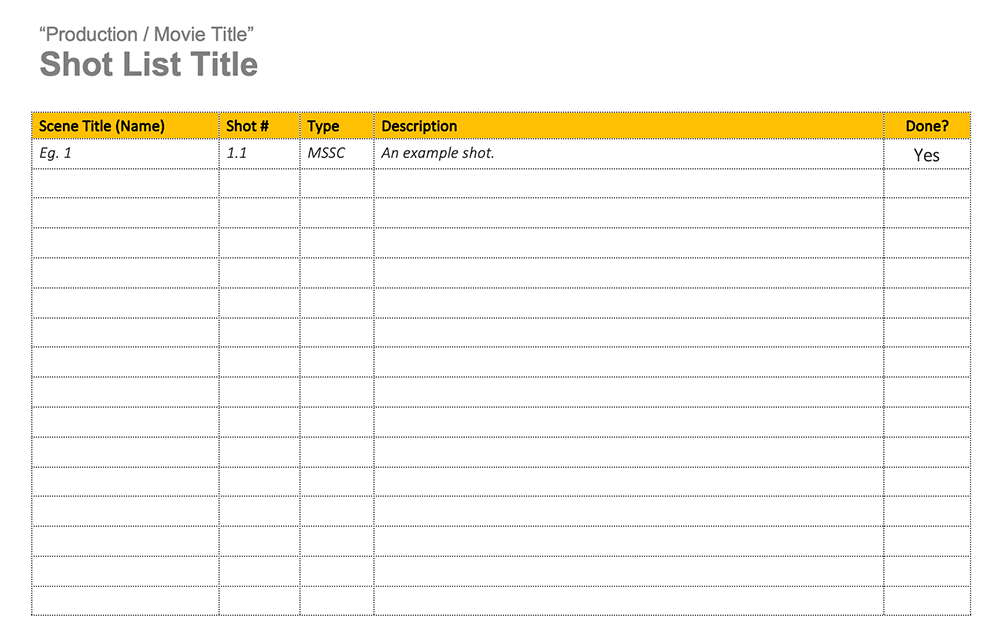 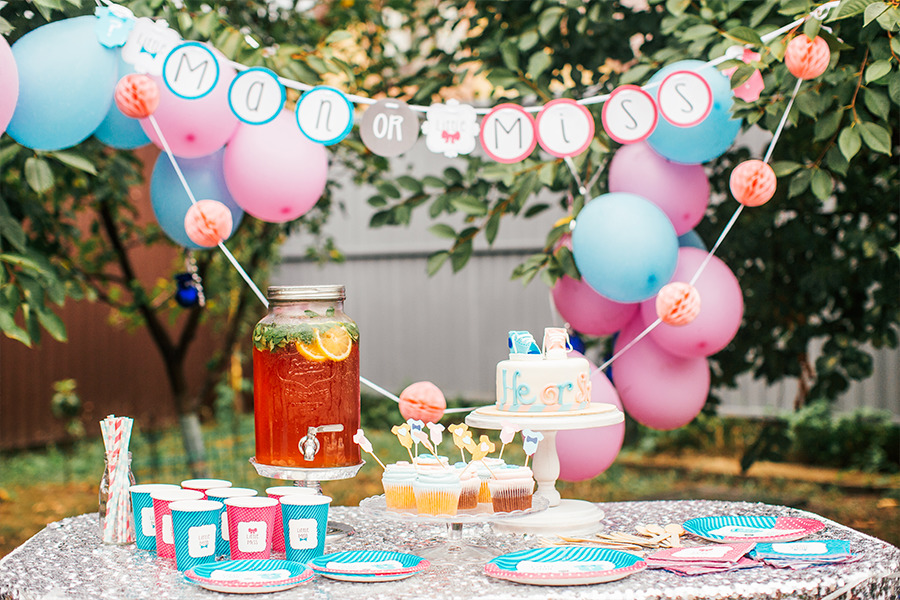 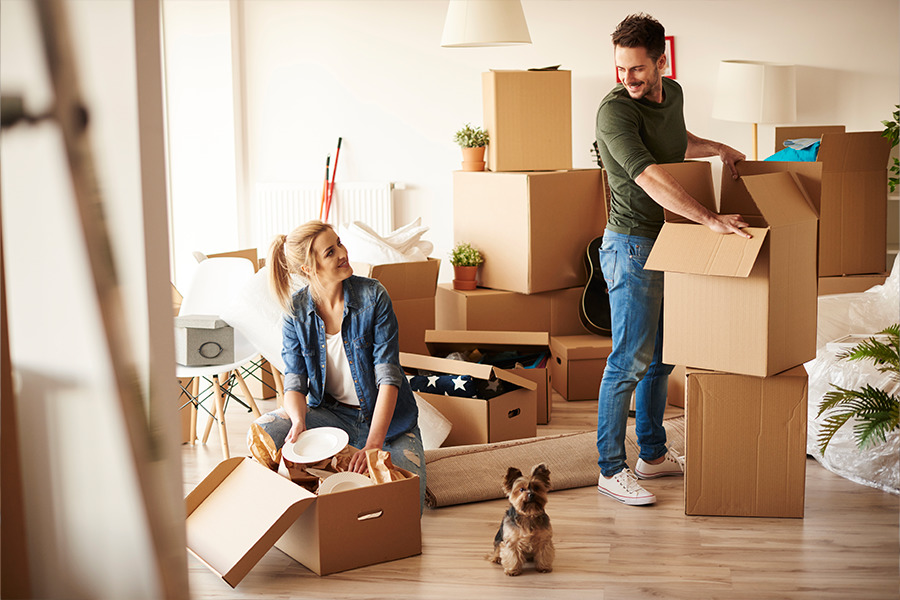 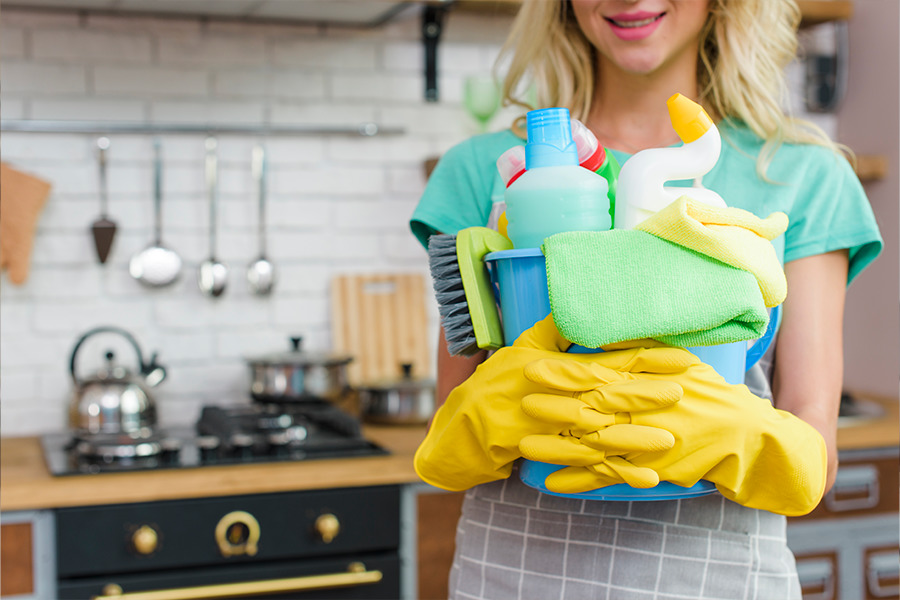 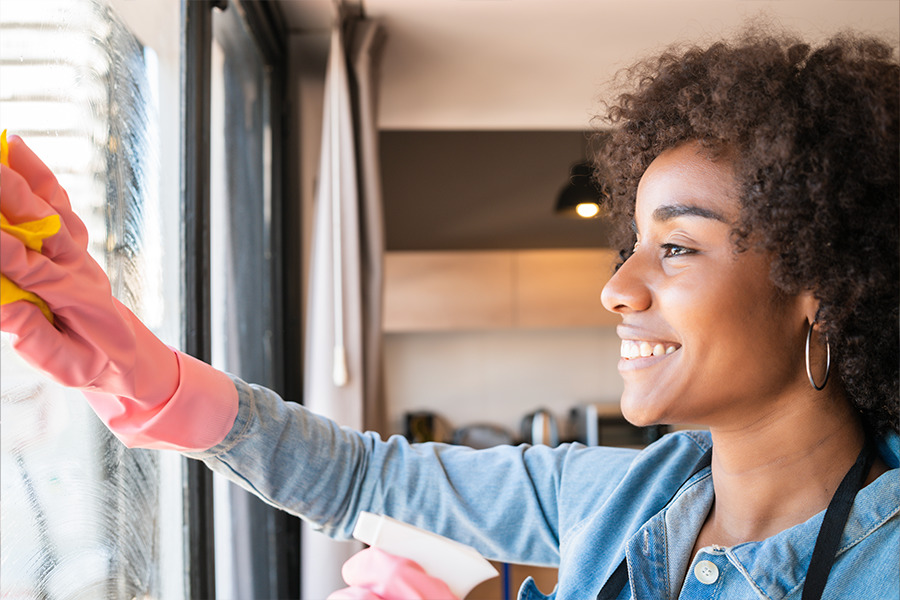 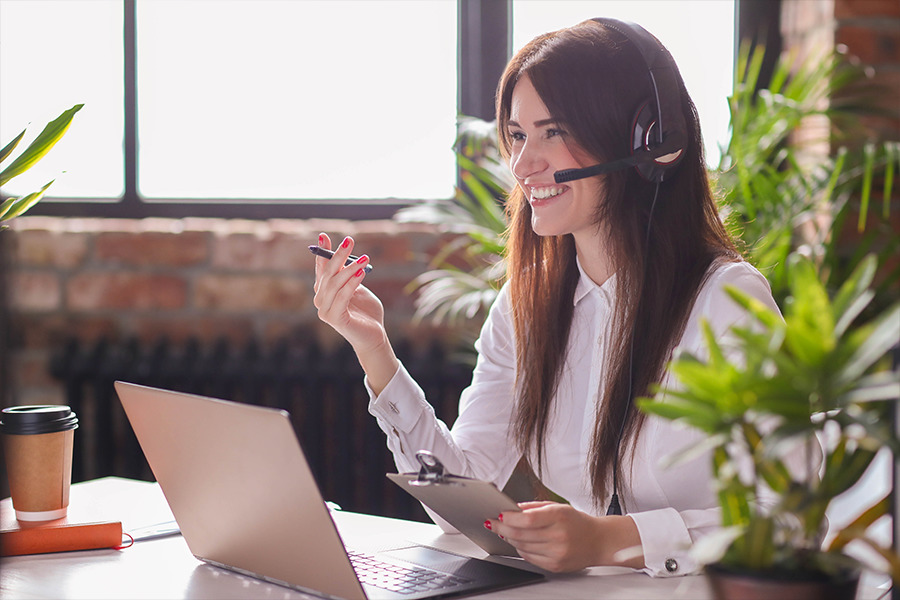 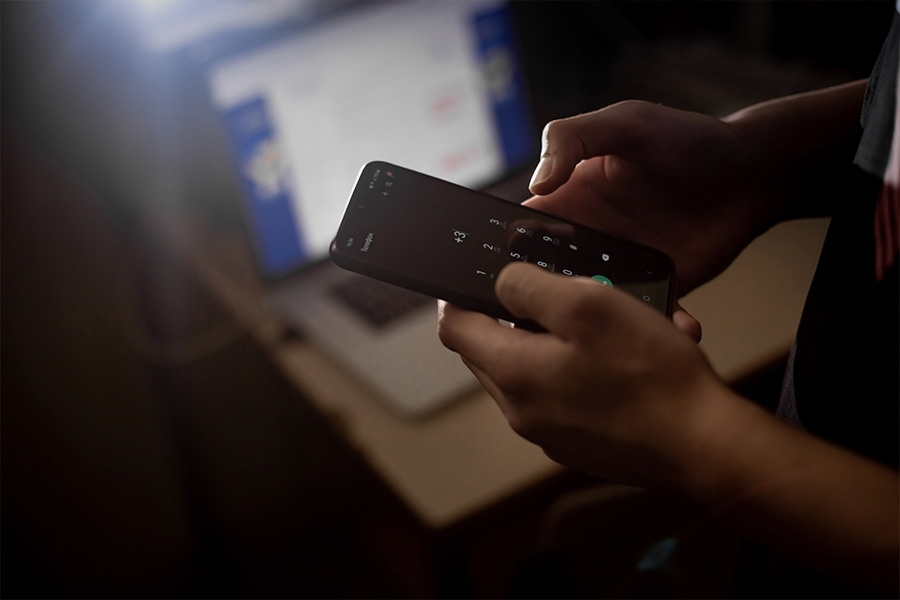 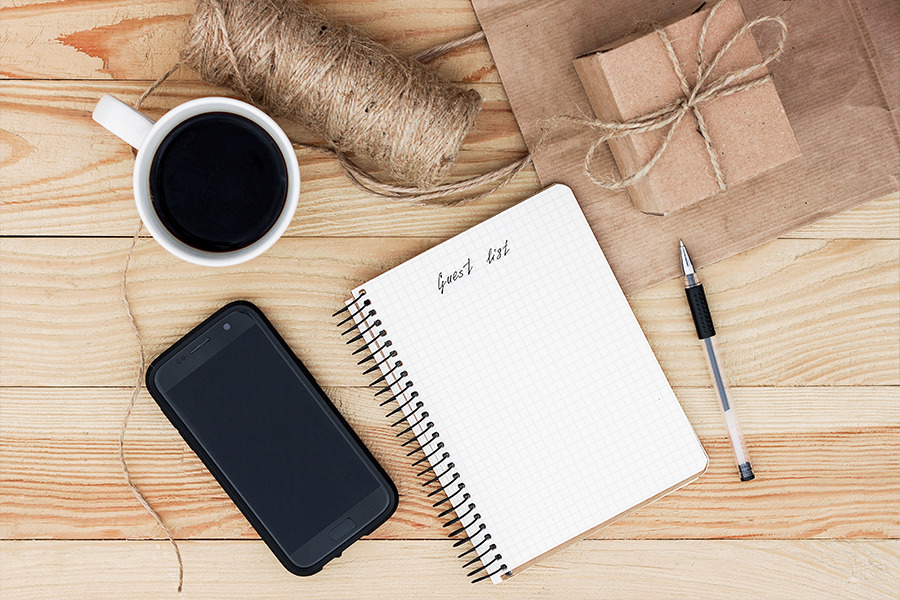 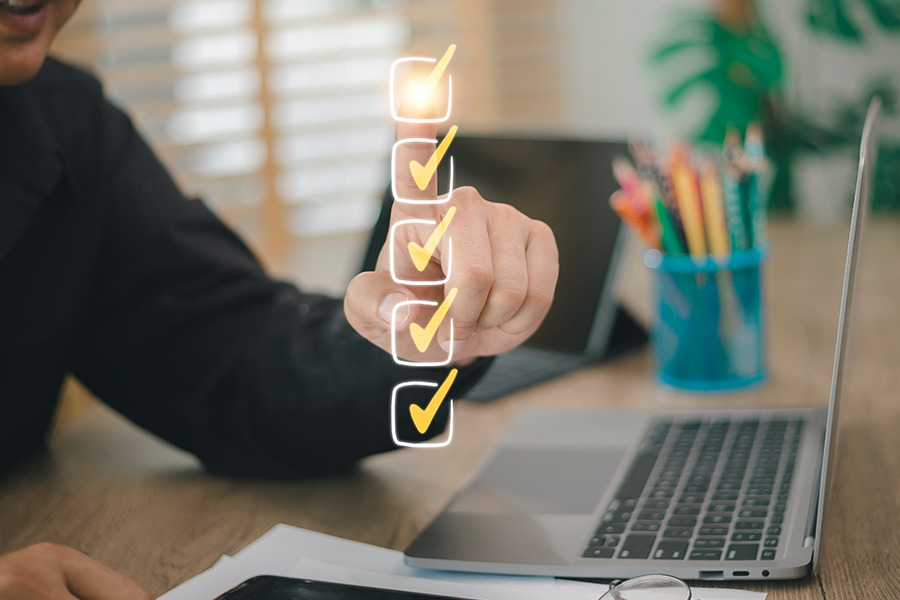